The “Great Resignation,” the trend where workers are leaving their jobs at a higher-than-usual rate, is continuing unabated. According to a May PwC survey, 20% employees said that they’re likely to switch jobs in the next 12 months while some 35% are planning to ask their employers for a raise in the next year. The reasons are myriad-workers list few opportunities for advancement and less-than-stellar benefits among their major complaints. But whatever the cause, the exodus is squeezing the hiring market across industries, from tech to restaurants and retail.

The high proclivity to leave roles is placing a burden on HR organizations, the majority of which expect hiring to become more challenging for the remainder of 2022. That’s led companies to canvass the software market for solutions, particularly applicant tracking systems (ATS) with features that promise to streamline aspects of the job candidate search process.

“The Great Resignation has been extremely difficult on the hourly workforce, with COVID restrictions adding complexity to how hourly workers can execute their responsibilities,” Sean Behr, the CEO of ATS vendor Fountain, told TechCrunch in an email interview. “Most importantly, the Great Resignation actually compounds the challenges in the hourly workforce. For example, if you are part of a ten-person team staffing a restaurant or working a shift in a warehouse and two people resign, the remaining eight people need to do 25% more work just to stay on target. This leads those eight people to be even more likely to resign and you get a downward spiral. ”

Fountain is one of the major beneficiaries of the renewed interest in ATS. Founded in 2014 by Jeremy Cai and Keith Ryu, the initial vision was to build a system to streamline job candidate interviews. But over time, a larger addressable market revealed itself. The pivot paid off as Fountain’s customer base grew from dozens to hundreds of brands, including Just Eat, Instacart, Chipotle, Sweetgreen, StitchFix, and GoPuff.

“Nearly 70% of the global workforce is hourly, and yet we saw that most hiring software was designed for hiring more corporate positions. As the gig and service economy exploded, the legacy ATS companies failed to evolve with it, ”he added. Behr was appointed CEO in 2020 after founding fleet infrastructure platform Stratim, serving as SVP of Adap.tv through its acquisition by AOL, and holding various management roles at Shopping.com. “We [at Fountain] understand that hiring for hourly workers is unique and fundamentally different, and so we are building a product designed to make a dent by keeping applicants connected through the process, ensuring hiring managers are engaged, and that recruiters feel empowered. ”

One of Fountain’s dashboards.

Certainly, there’s evidence that manual HR processes are exacerbating the challenges around the worker shortfall. One timely survey of office workers in the UK found that 66% of HR departments are still using traditional paper-based and manual methods for onboarding management. More than 33% of respondents said that paperwork, such as contracts and compliance policies, hadn’t been completed by the time they started work.

The promise of ATS platforms like Fountain is automating away the more arduous, time-consuming steps in recruitment to allow HR professionals to focus on more important tasks. For example, Fountain uses robotic process automation-software-based “robots” that handle repetitive, rule-based tasks-to minimize the need for recruiters to request more information from candidates. Using the platform, HR teams can post openings to job boards like Indeed, connect with candidates over text and video, and leverage “automated” document e-signing as well as Fountain’s professional sourcing services.

Newer additions to the platform include Instant Hire and Instant Interview, which enable hiring managers to configure applicant workflows while allowing candidates to launch a phone interview with a recruiter while they’re applying. Fountain also recently launched Fountain Source, a suite of sourcing products and services including a new direct integration with Indeed.

“A C-suite level manager in HR or operations cares about Fountain because the software will directly solve business problems and hiring challenges,” Behr said. “Automation and speed returns time to the HR team, and means more time for other tasks. Removing re-work and simplifying workflows is key… Simplifying HR with one solution that can solve multiple problems, ie, everything behind a single pane of glass. ”

Fountain certainly isn’t the only ATS vendor around. Behr considers both incumbents and startups like Paycom, Workday, Icims, SmartRecruiters, and Jobvite to be the company’s top competitors. SmartRecruiters is formidable, having raised $ 110 million at a $ 1.5 billion valuation last July. Paycom has a market cap of over $ 16 billion. And Workday in March raised $ 3 billion through a debt offering.

There’s also the question of growth prospects. Fountain, which declined to reveal revenue figures, appears to have captured the early tech adopters (eg, Instacart). But many HR departments are reluctant to embrace new technologies. A PwC report shows that eight out of ten HR leaders struggle with tech adoption challenges, whether a lack of flexibility, competing priorities, or poor business plans. Meanwhile, others who’ve deployed internal, custom-built systems face hurdles in moving to a software-as-a-service model. 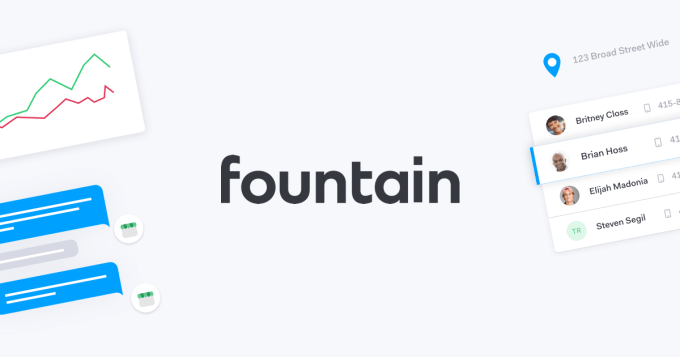 But Behr expressed confidence in Fountain’s trajectory – even taking into account the cloudy economic forecast.

“The pandemic was a catalyst for advancing the embrace of technology solutions for hourly and on-demand work. Essential work impacts everyone on a daily basis, and Fountain is proud to have helped both job seekers find new opportunities while partnering with our customers to achieve their hiring goals, ”he added. “We believe that the current hourly labor market shortage will continue to drive investment in solutions like Fountain, and with this investment we believe we are well positioned to weather any potential headwinds.”

With the new money, Fountain intends to expand internationally with a focus on Europe and Asia and “widening the platform’s capabilities to offer more unique insights and analytics.” Bucking the trend, Fountain also aims to grow its workforce from 230 employees to 325 by the end of the year.